About the Salvage Wood Program

The Salvage Wood Program germinated out of several projects. It began with an elm tree in front of Gerberding Hall that fell victim to Dutch elm disease in 2009. The tree needed to be taken down, and UW Facilities Grounds Management didn’t want the wood to be wasted. A local reclaimed wood furniture store offered to store the wood and dry it for two years. Later, a community member approached the University about making a log bench for a local restoration project. But at that time, carpenters didn’t have the proper equipment to cut large trees into workable pieces.

Still in its seedling stage, the program grew steadily after receiving a grant from the Campus Stainability Fund and with help from the UW chapter of Engineers Without Borders. In 2016, Grounds Management acquired a sawmill, followed by a solar kiln that dries the wood before it is milled and made into specialty items. For the past few years Facilities has been busily stockpiling wood to be used for creating future projects.

The Seattle campus contains a well-established population of mature canopy trees, with a much higher proportion of deciduous species than conifer species. While the forest that once occupied the UW site featured tall coniferous species including Douglas fir, western hemlock and western red cedar, those were cleared when the campus was initially developed. While conifers can live for more than 1,000 years, deciduous trees live about 100 years. The Brockman Memorial Tree Tour is a great introduction to the wide array of current tree species on campus.

Previously, trees that were marked for removal from the campus landscape were chipped or reduced in size, so they could be disposed of in a green waste container. The University spent thousands of dollars annually on removing campus tree material and purchasing new lumber for projects.

By keeping the tree material on campus, money is saved in disposal costs, less energy is used in waste transportation, and some of the asset value of the tree is retained through its incorporation into campus projects. The investments made into that tree over time are preserved, especially if the final product becomes a permanent feature on campus.

From mill to kiln to fine carpentry

After a tree is felled, it must be bucked, or cut into logs of standard sizes, then transported by truck to a portable sawmill located in the UW Facilities corporation yard on the eastern side of campus. The bark is then typically removed, and the logs are sorted by species and size and further refined and trimmed of any irregularities. The resulting lumber is stored and dried in a kiln located nearby at the UW Center for Urban Horticulture. 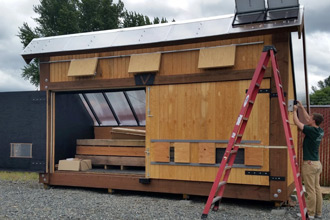 Students from UW Engineers Without Borders contributed to the design of the kiln, which uses solar panels that power fans and circulate air within the interior. It is heated to about 30 to 40 degrees warmer than current air temperatures. Lumber drying times are dependent on outdoor temperatures, thickness of cut and species, and takes between six weeks to more than a year.

Once the wood is ready to use, UW Facilities fine carpentry shop goes into action. In addition to smaller items such as name plates and recognition plaques, salvage wood has been turned into items of use all across campus. Among the notable campus projects are benches for the Whitman Walk and Kinkaid Ravine restoration areas. And remember the elm tree outside Gerberding that started it all? It now lives on as a beautiful conference table in the UW Facilities Training Center.

For more about sustainability efforts at the University, check out green.uw.edu.