UW Facilities’ Jeannie Natta was awarded the Distinguished Leadership Award by the Design-Build Institute of America (DBIA) at its national conference in Las Vegas on Nov. 4.

Natta is an interim director in the Project Delivery Group, which is responsible for the delivery of capital projects at the University of Washington. The DBIA cited Natta’s leadership of major projects such as the Hans Rosling Center for Population Health as well as her work teaching students and young professionals. 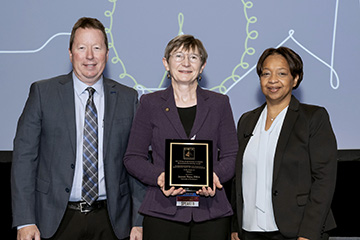 Natta receives the award at the Nov. 4 event in Las Vegas.

“This award is really of a reflection of all the work that the University of Washington is doing, particularly in our Facilities department, to move the needle on effective delivery of integrated projects,” Natta said.

Design-build requires “active, collaborative consensus-building,” Natta said. For the construction of the Hans Rosling Center, Natta not only worked with project managers for design and contracting, but also led a group of UW stakeholders that included the departments to be housed in the building as well as maintenance and custodial staff.

She said, “It takes active participation by the owner — from our end user clients who are going to use the space to all of our Facilities staff — and everybody just leaning into the process of trying to make sure we get the right building that we need in order for it to serve the users of the program that’s inside the building. … As an owner, the most important responsibility we have to the project team is an efficient process for making decisions.”

While Natta credits UW colleagues, her colleagues recognize her leadership.

“It is a great honor that Jeannie was recognized at the national DBIA conference,” said Beck Eatch, interim executive director of the Project Delivery Group (PDG). “Jeannie continues to push UW to learn and grow from each project to keep us recognized as front-runners in the industry. PDG is grateful to have her on our team.”

Natta’s association with the University spans nearly three decades, starting in the mid-90s when she worked as an area coordinator for Housing and Food Services. She then worked in the private sector as an electrician for 10 years before returning to the UW to earn a certificate in Construction Management. She began working in the group now known as PDG as an associate construction manager in 2011, and then became a project manager after getting her master’s degree in Construction Management from the UW in 2013. Among her early projects was one of the first design-build projects owned by a state agency, the renovation of the McDonald Smith building on the UW Tacoma campus.

Natta first learned about design-build as a graduate student in a class taught by Darlene Septelka, who became Natta’s mentor. Septelka, a teaching assistant professor at the UW, was also honored at the Nov. 4 conference as part of the new class of DBIA Fellows, which recognizes the achievements of accomplish design-build professionals

Natta remains as passionate about design-build as she was when she first learned about it in graduate school.

“I think when people work together in a collaborative environment, they are more encouraged to bring their best self and their passions to the table and to good results,” she said. “Good collaboration also is the ability to work through conflict and disagreements and reach the best decision. It’s hard work. It’s not for the faint of heart, by any means.”

This year, Natta will continue to share her passion for design-build with students when she becomes the sole instructor for classes on the topic in the College of Built Environments, classes she co-taught with Septelka last year.