As the store for unwanted items from UW departments and medical facilities, UW Surplus sells everything from office chairs and athletic gear to DNA sequencers and a research vessel. COVID-19 moved sales online, but now the public store is open again to customers.

The Surplus public store, located across from U Village on 25th Avenue NE, reopened for in-person shopping in July. Like before the pandemic, the public store is open to the general public on Tuesdays. On other weekdays, it’s open to UW departments, government agencies and nonprofit organizations. 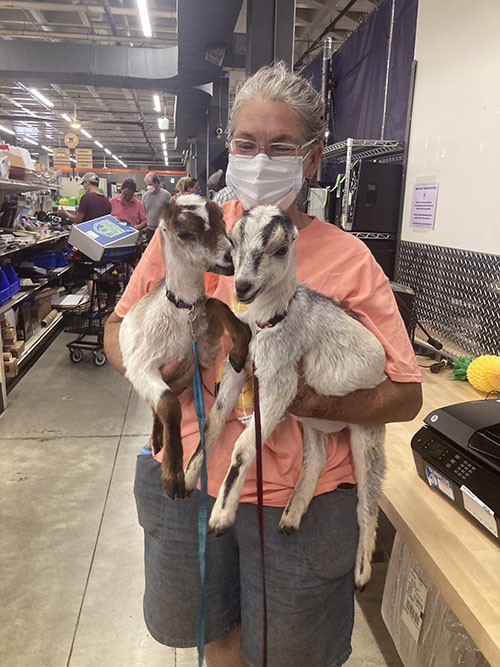 Lacia Bailey comes to UW Surplus with her baby goats every Tuesday to socialize them to urban life. She also shops for items for her farm.

Even the goats are back

Customers returning to browse the store include Lacia Bailey — and her baby goats.

Bailey, who has been shopping at Surplus since before it opened at its current location in 2010, comes every Tuesday with “the kids” in an effort to “breed the perfect urban dairy goat.” Making the goats comfortable with the road noise and customers socializes them so they’ll thrive in the city, not just survive it. She also shops for items she needs on her farm.

When the public store reopened, Bailey was happy to see people she hadn’t seen in over two years. “It was awesome. It was so good to see everybody — so many of the regulars still,” she said.

Bailey and the goats are a part of the community of Surplus’ regular shoppers, which numbers in the hundreds according to Becky Ryser, the store’s program support supervisor.

“I really love all of them. There are so many interesting intersections of the larger community showing up in one spot,” Ryser said. “It gives us a chance to act as ambassadors for the UW in a really interesting way, because most of what people react to when they come in is the assortment of things we have.” 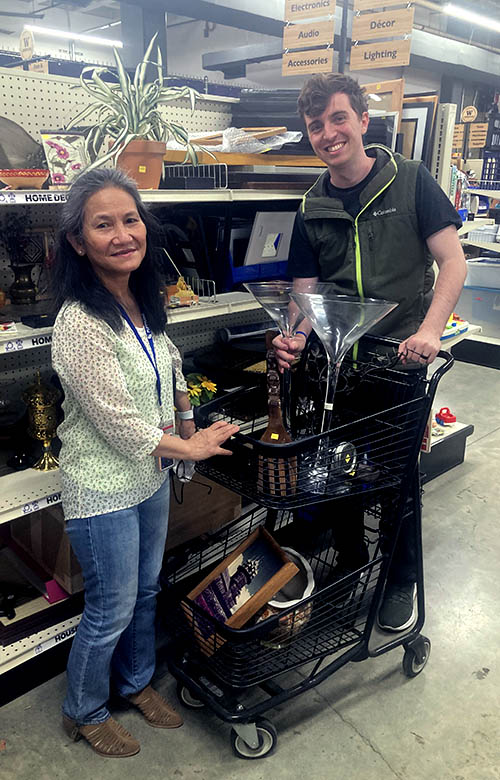 Katie Anderson, who works in the paleontology department at the UW’s Burke Museum, agrees. “The university is all-encompassing. It’s like a little village in itself,” she said, visiting the store for the first time.

Anderson and her colleague Kelsie Abrams came in to look at a 6-foot-high surgical microscope with arms that pivot, allowing you to move the microscope into flexible positions and peer at an item from any angle. They talked about ways they might reuse its parts to examine giant slabs of rock with dinosaur fossils.

Reuse, repurposing and sustainability are central to Surplus’ mission. Surplus receives 70,000 to 80,000 items every year, says Jeanel Cassidy, the store’s program operations manager. It sold about 65% of items it received over the last fiscal year. For items that can’t be sold, staff dispose of them in the appropriate recycling stream or partner with agencies and nonprofits to transfer items that would benefit them.

As a result, Surplus not only diverts waste, but also helps fulfill an immediate need. During the height of the pandemic, for example, UW hospitals were scrambling to make space for COVID-19 testing. They sent over furniture and equipment they needed to get rid of. Surplus transferred those items to a field hospital caring for patients displaced from a county hospital due to the pandemic.

In all, Surplus sent only about 1% of the items it received over the last fiscal year to the landfill. It was able to resell, repurpose or recycle everything else, a process that Cassidy calls “very gratifying.”

Learning from the move online

While many retail stores went out of business during the pandemic, Surplus brought in enough revenue to maintain operations — even though it closed the public store in March 2020 — by creating an online storefront. New items were posted on its revamped website every first and third Tuesday, and customers had a week to swing by and pick up their purchases.

Surplus also moved its live auctions online and expanded its use of GovDeals.com for timed auctions. Auctions are used to sell larger, more specialized or more expensive items like vehicles, computers and parts, sporting equipment, teleconferencing equipment and more.

The online storefront is temporarily closed due to the demands of reopening the public store, and staff plan on reopening it later this year. But the pandemic forced Surplus to find new ways of doing business, and they are continuing to apply the lessons learned. 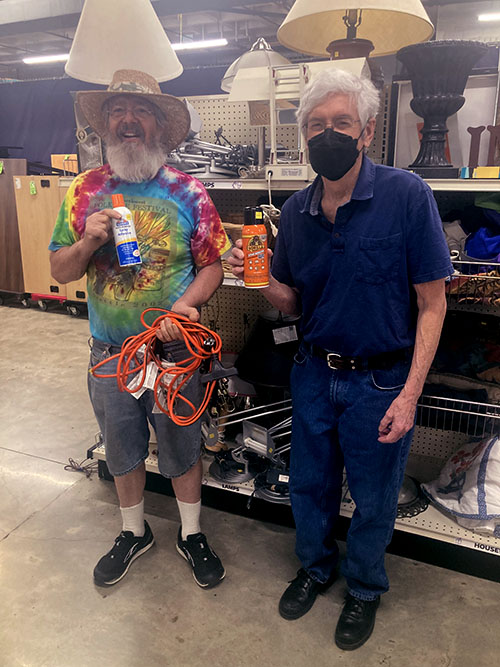 Neighbors and Surplus regulars Dan Hill and William Stewart showed off their purchases, shopping in-store after using the online storefront for the past two years. “Smaller and smaller, the things I’m allowed to bring home,” Stewart said.

With the online storefront, customers had to come by to pick up their items, and sometimes they forgot. Ryser created a series of reminder emails, a procedure that she is now using with customers shopping in the store who choose to return for their purchases at another time. They also learned that some items sold better virtually: Some of the art they normally would’ve sold in the public store for $100 fetched hundreds or thousands of dollars online.

Allowing customers to shop online and pick up items at their convenience also brought in people who might not have ever thought about shopping at Surplus before. Ryser says that when customers came to pick up their items, they’d peek in the windows, so she hopes they might be interested in shopping in-store too. There are also online-only customers who may never want to shop in person but who will come back when the online storefront reopens.

With the online storefront, Surplus reached new people. By reopening the public store, it’s reassembling the group of regulars who like to comb through the merchandise, looking for quirky finds or good deals. Both have led to expanding the community of Surplus shoppers.

“I’m excited to hopefully be able to get more people through the door now,” Ryser said. “And I’m excited to get to the point where we can do both the public store and the online storefront at the same time so that we can get the most things to the most people, which is part of our mission.”