In all, about 2,000 air purifiers would need ordering, unpacking, testing and documenting in a database so each could be tracked and maintained. They would then need to be delivered and installed to all three UW campuses (Seattle, Bothell, Tacoma) along with remote sites including Friday Harbor Labs, Olympic Natural Resources Center (Forks), classrooms and clinic spaces at Sand Point and beyond.

Plan the work; work the plan

“It started back in July, when we began assessing vendors, then we vetted the purifiers with Environmental Health & Safety to make sure we met their requirements,” says Teresa Seyfried, assistant director of UWF Materials Management, who headed up the search. The model ultimately chosen was the Trio Plus from Field Controls. With a room capacity of up to 1,000 square feet, it has been very popular with academic institutions, Seyfried says.

Early testing and research showed air purifiers do indeed work. The UW Alliance for Academic Preparedness, a consortium of experts in allied disciplines who study COVID-19 response strategies have found that portable HEPA purifiers, including the Trio Plus were able to significantly reduce airborne SARS-CoV-2-surrogate particles. The addition of portable HEPA purifiers augmented other decontamination strategies such as ventilation 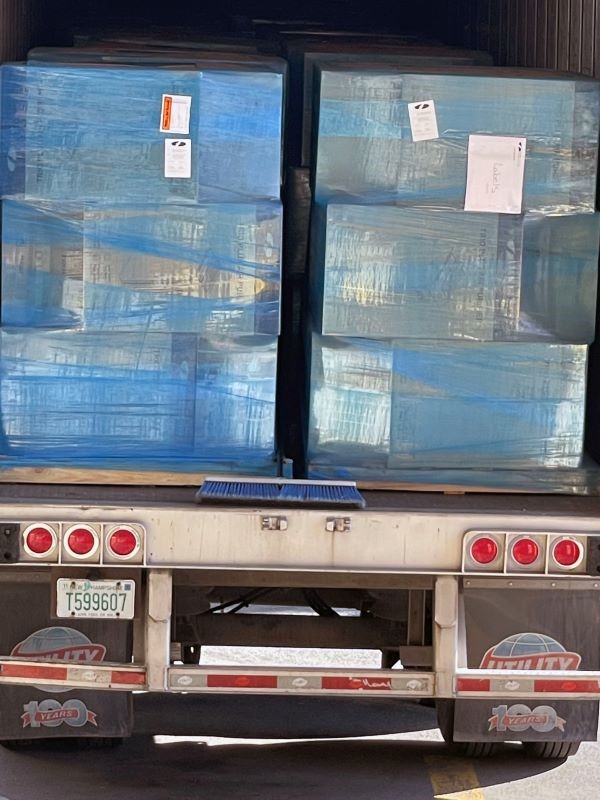 The challenge for UW Facilities then, was to secure the air purifiers from North Carolina in time to be installed before the first day of classes. Ordering early helped avoid the supply chain delays that came later, but it still wasn’t simple. 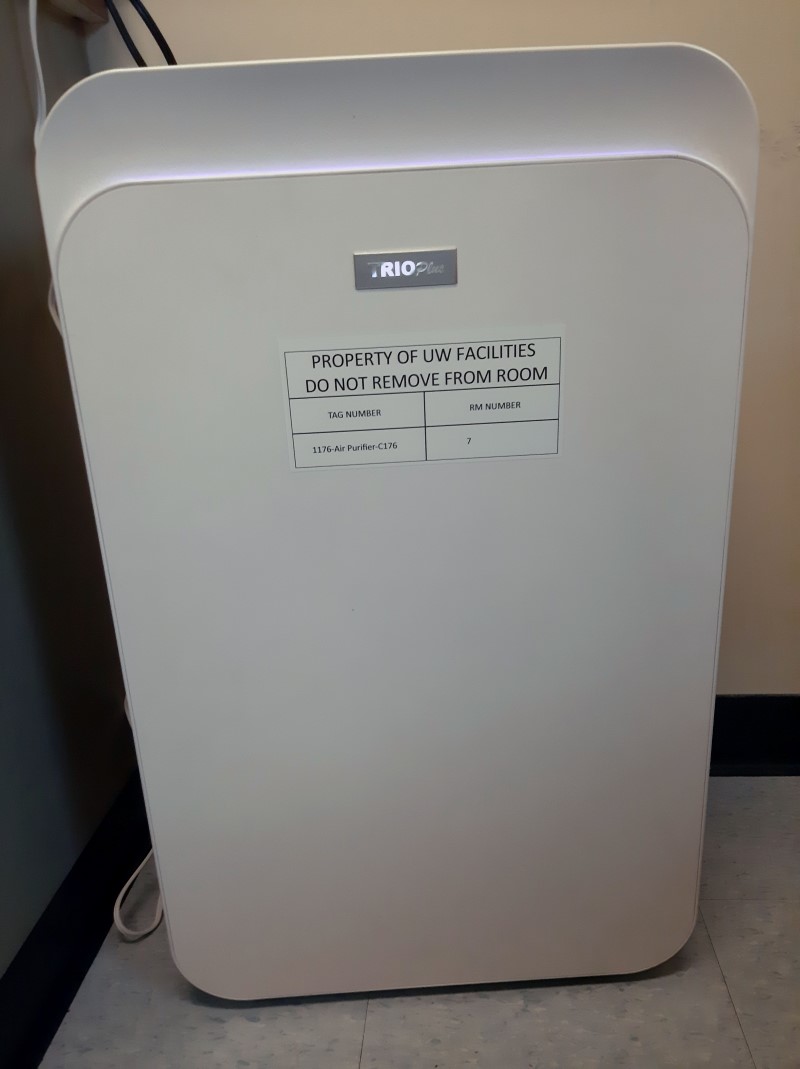 Each truck carried 312 Trio Plus units, like this one.

First, campus clients were contacted and calculations were made to determine how many units needed to be installed according to the criteria established by UW Environmental Health & Safety (EH&S). Liz Penttila, organizational development specialist for UWF Maintenance & Construction, helped corral all this information into extremely lengthy and detailed spreadsheets.
Like a well-oiled machine

“There were just a lot of moving parts to this project, and no SOP [standard operating procedure] for this – we learned as we went,” explains Jerry Anderson, program operations assistant manager for UWF Stores.

He adds, “We knew this project was coming down the pike; Arne [Nestergard], our procurement supervisor, kept me in the loop with all the shipping delays. Our very first load was late. Jack Nolan, Arne, Teresa, we just constantly kept in touch so we knew where we were at all times.” 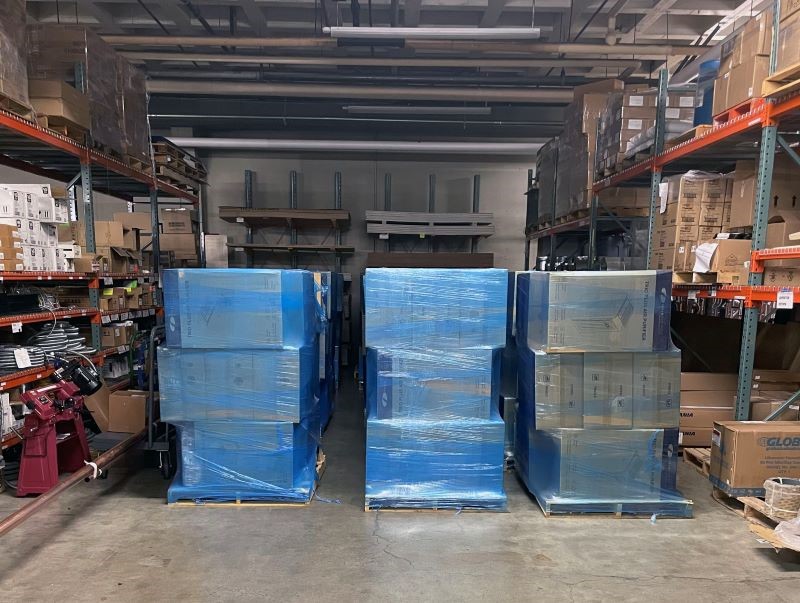 Once the first three semi-trucks arrived, offloading the pallets of purifiers was relatively quick.

After unpacking the first few units, says Seyfried, it became clear that a huge space was going to be needed to store the Styrofoam and cardboard that encased each.

Her team solicited help from UW Recycling to manage the mountains of material — roughly five times more Styrofoam than the entire University usually produces in a given month, according to UW Recycling Program Coordinator Adam Fehn.

“There was no contamination at all in the material they produced so it was great material for recycling,” says Fehn. “It was pretty straight forward, thanks to their team, but our vendor did have to use a larger truck to collect the increased volume.”

UW Facilities Training Center became headquarters for the next phase: UWF employees helped take the purifiers out of the boxes, unwrap the filters and test them all. Each purifier was then labeled and recorded in UWF’s computerized work management and tracking system. 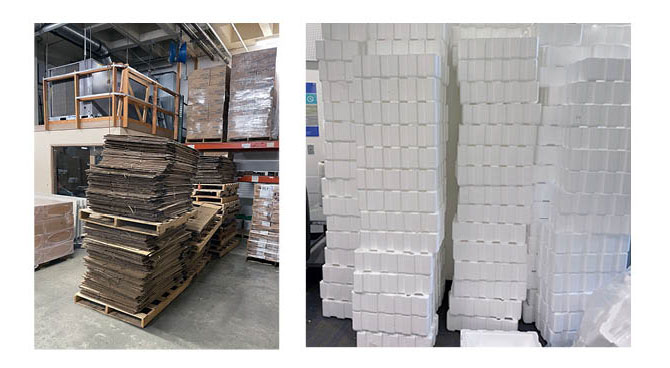 Staff had to remove lots of cardboard and Styrofoam packaging that encased the purifiers. UW Surplus warehouse was used to store packaging.

Four more semi-truck loads of purifiers were ordered and delivered, and the process of un-packaging and prepping them for use began all over again. “Flexibility and adaptability of our staff have been key,” Seyfried says.

At the UW Seattle campus, installation was divided among Maintenance & Construction’s geographic areas: the Northeast, Health Sciences and Southwest Zones.

Facilities Stores drivers delivered them to the Zones, UWF staff in the zones then had the building and room lists and worked from there to install them in each space.

“We delivered the last of the general classroom units the day before school started,” says Anderson.

Supply chain delays
The air purifier challenge isn’t over yet. A smaller order of more powerful air purifiers have become stuck in the supply chain hiccups that have affected so many other industries around the world. The Trio Pro air purifiers can handle up to 2,000 square feet, and plans are to place them in classrooms and designated eating areas that currently need four or more of the standard Trio Plus units. 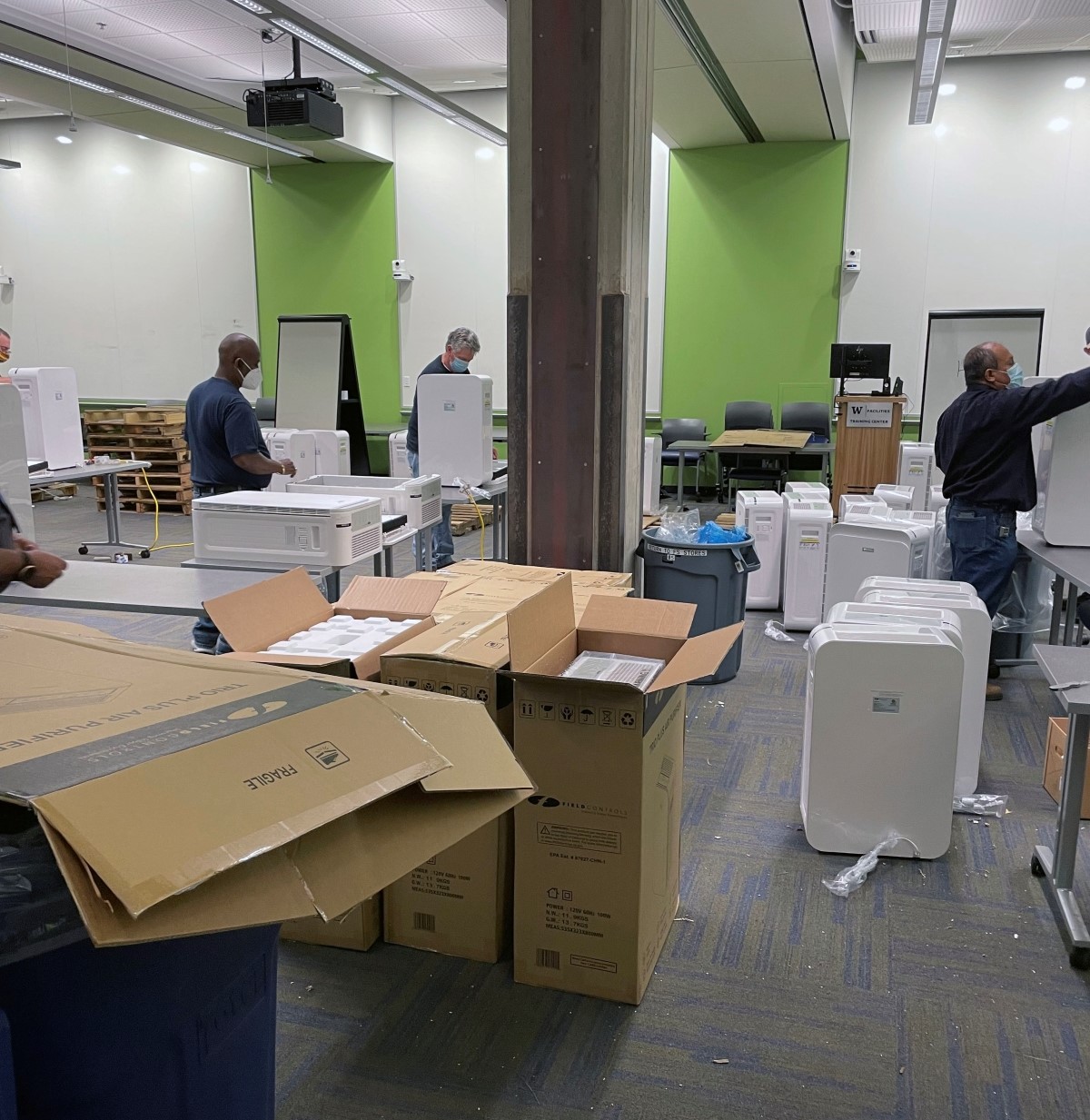 Several stations were set up in the Facilities Training Center classrooms: staff removed them out of boxes, unwrapped the filters, tested them all; and finally labeled them as assets with unique identifying numbers in order to track them.

The 50 Trio Pros the UW has ordered are being shipped from Asia and the delivery date, which has slipped several times, is currently around the end of December.

“The Trio Pro units are more efficient with these larger load requirements,” says Worden. “The existing Trio Plus units being replaced will be repurposed to other spaces or held in reserve as replacements. But they’re stuck in a shipping container somewhere.”

Plans for routine maintenance of the 2,000 air purifiers will take place during the University’s spring break, when filters will be replaced while most students are off campus.

“At some point hopefully there will come a point when it will be decided that air purifiers will no longer be needed,” says Seyfried, whose unit also includes UW Surplus. “I guess that means they’ll all wind up being surplused, and we’ll see them all over again.”