Summers keep getting hotter and the UW’s population keeps getting bigger. Washington state law requires sharp reductions in greenhouse gas emissions. Meanwhile, some of the energy infrastructure on campus is old enough to qualify for emeritus status. To David Woodson, the new Executive Director of Campus Energy, Utilities, and Operations for UW Facilities, it all adds up to a powerful opportunity.

Woodson, who started in November, is tasked with overseeing a transformation of the UW’s energy infrastructure. It’s a big challenge, but a familiar one. Woodson oversaw a large-scale overhaul of the campus energy system at the University of British Columbia, implementing efficient and sustainable solutions. He came to the UW for the opportunity to help drive a similar project at a school near to his heart — Woodson is a UW grad and former Husky band member. 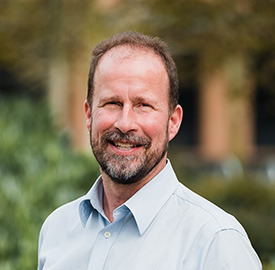 “I bleed purple and gold,” he said. “I also felt really inspired. The driver was to apply the lessons learned, the mistakes made, the things we did right, and get a second chance to do it again. And how lucky I am to have the opportunity to transform the energy systems at two world-class research institutions.”

When Woodson thinks about the future of energy use at the University of Washington, he sees three major challenges.

First, the UW is committed to decarbonization initiatives for the on-campus power plant to reduce greenhouse gas emissions and modernize campus infrastructure. This will require a transition to some level of electrification of the thermal energy systems.

Second, electrification will bring with it a greater demand on the grid. Increased cooling demand and other measures such as electrification of the UW’s vehicle fleet will also add to the pressure on the grid. Finding ways to reduce the University’s energy load through conservation, better metering and other efforts will be necessary.

Third, keeping buildings cool will become a greater issue as temperatures rise, leading to more frequent hot days as well as more extreme temperatures during heat waves. Providing more cooling will add to the electrical demand challenge, but also could provide an opportunity to recapture the waste heat from the cooling process for use in the campus heating system.

The UW’s power plant is easy to spot with its green smokestacks rising above east campus, but its function isn’t as apparent to the students and staff walking by every day on the Burke-Gilman Trail.

Contrary to the name, the primary function of the power plant isn’t to generate electricity, but provide heating and cooling for campus buildings. The heat is provided by steam which is pumped via an underground network of tunnels to heat buildings throughout campus. The steam also powers a turbine which generates some electricity to augment the power campus gets from Seattle City Light.

The power plant also chills water, which is also sent to buildings across campus for cooling in warmer weather. Centralizing heating and cooling for buildings can be more efficient than having equipment in individual buildings. The steam is also recycled back to the power plant as hot water, thus requiring much less energy to transform into steam again.

However, the boilers that create the steam are powered by natural gas, and that accounts for most of the greenhouse gas emissions generated on campus. Since the UW is required to sharply reduce emissions in the coming years by state law, decarbonization initiatives for the plant will become necessary.

The UW has been working toward a greenhouse gas emissions reduction goal set by the Washington legislature, calling for the university to reduce emissions 45% from the 2005 level by 2030. In 2021, the state passed the Climate Commitment Act, which sets the foundation for a cap-and-trade-type system. This means that missing emissions targets will likely come with a financial penalty.

The UW’s Sustainability Action Plan, adopted in 2020, includes greenhouse gas reductions as one of 10 campus sustainability targets. Current actions toward the goal include determining a plan to repower the campus to reduce the use of fossil fuels.

That might mean that the UW moves from using steam for heating, and instead moves to a more-efficient hot water system, which would also provide opportunities to implement sustainability features like capturing low-grade waste heat for re-use. Woodson oversaw a similar transition from steam to hot water in his previous role at the University of British Columbia.

There are also immediate needs. The power plant’s equipment is starting to show its age — the youngest of the boilers is about 20 years old but the oldest is more than 75 years old, dating back to when the campus ran on coal. The turbine that generates electricity was installed in 1968, and is now well past its expected lifespan. There’s a danger of equipment failures, which in an emergency could mean a loss of utilities needed for essential campus functions.

To ensure the existing power plant can reliably operate and provide resiliency to campus, last year the UW Board of Regents approved a $27 million project to upgrade the steam system and replace the aging turbine with a more modern unit, including an energy recovery system which will improve efficiency. This upgrade will make sure the plant continues to operate smoothly as a long-term solution is implemented.

Whatever the final project looks like, it will require the UW to look at how all the campus energy systems work together to determine the best path forward.

Working to improve and upgrade the campus energy system is by no means a new idea. The UW has done several studies looking at possible future paths for the Power Plant in past years, providing a foundation for these projects. Facilities teams have also done energy audits of every building on campus to identify conservation opportunities.

The Energy Resource Conservation team was given a Husky Green Award in 2018 for their efforts in implementing the measures that were determined to be priorities, reducing energy use and also saving the UW money in avoided utility costs.

Woodson said the teams working on these issues have eased his transition into UW.

“A lot of smart and highly engaged people have been working on this, long before I arrived,” Woodson said. “With all the work done over the years, there’s also a lot of pent-up enthusiasm ready to make these big changes happen.”

Decarbonization and the UW discussion