Moving out & giving back

Every June as the spring quarter wraps up, students living in all on-campus residence halls and on Greek Row are required to fully vacate their rooms before summer break. Often, there’s only enough time and space to pack the essentials, which means tons of items are at risk of being left behind on University District streets.

This is where UW Recycling steps in. Their two waste diversion events—SCRAM (Students Cleanup, Recycle and Moveout) and Husky Neighborhood Cleanup (HNC)—not only keep the campus clean and prevent illegal dumping, but they also help benefit nonprofits and organizations in the Seattle area. UW Recycling has established partnerships with groups including University District Food Bank, Northwest Center, Real Change and UW Surplus. 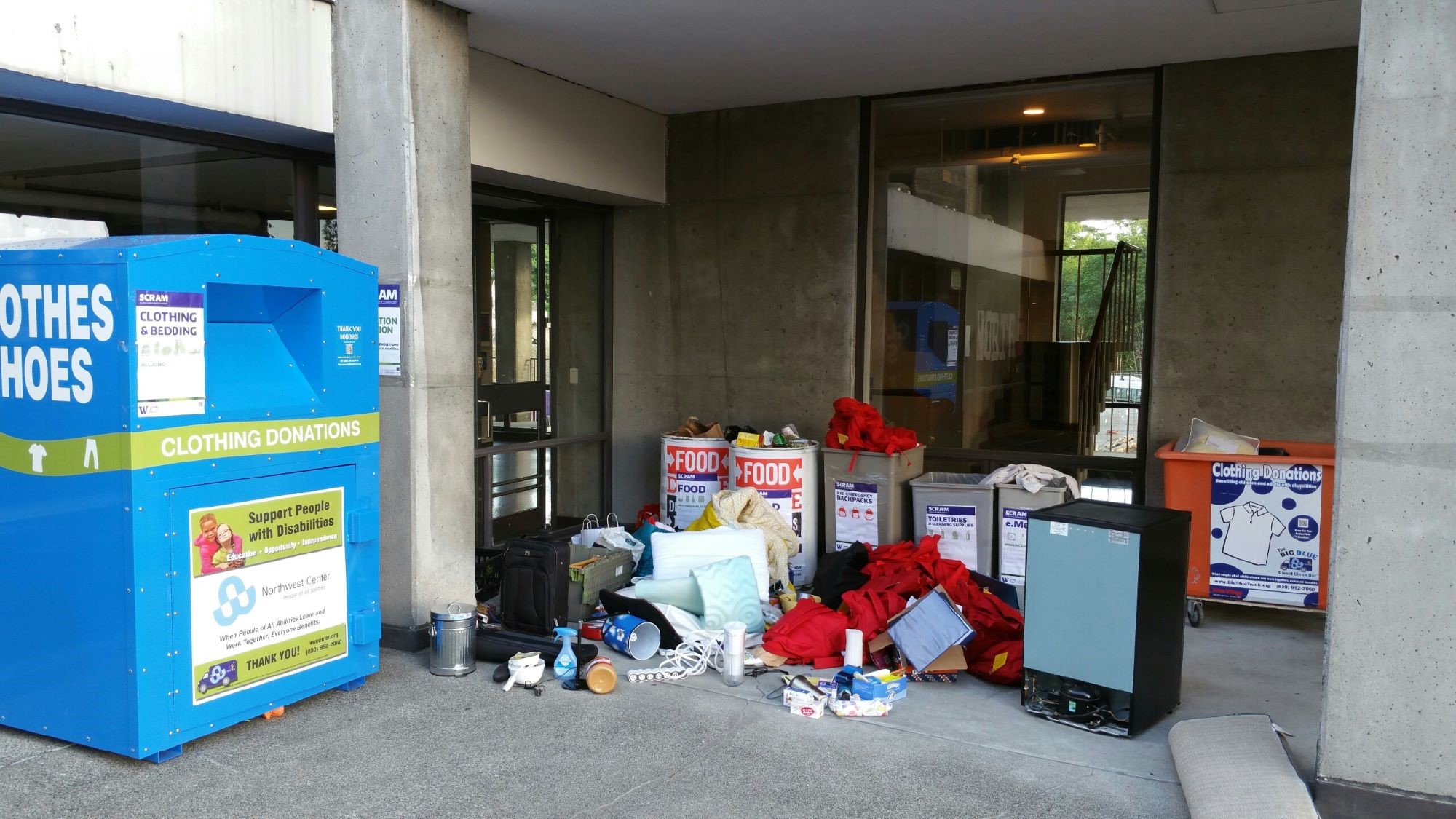 Daily maintenance of SCRAM bins is necessary in order to keep up with the high volume of donated items. Photo credit: UW Recycling

“Thank you for all of the backpacks and supplies. So many people across the city are enjoying the donation items and are now able to put money towards rent, food or other bills because they don’t need to pay for laundry supplies or toiletries,” said Karina Saunders, Real Change vendor program associate.

The effectiveness of SCRAM is due in part to its intensive, all-hands-on-deck spirit. Administrative staff, crew members and a temp employee work together to keep everything on track. With so much material being collected, donation sites are inspected, sorted and organized on a daily basis. “This year, I had more interactions with residents while monitoring the sites than ever before, which is great because we were able to help direct them to the appropriate donation bins,” said Emily Newcomer, assistant director of UW Recycling. “Students are also very appreciative, especially those who need to fly home and are limited by how many bags they can check-in. SCRAM provides an alternative for them to get rid of stuff, as opposed to just throwing it all away,” said Newcomer. 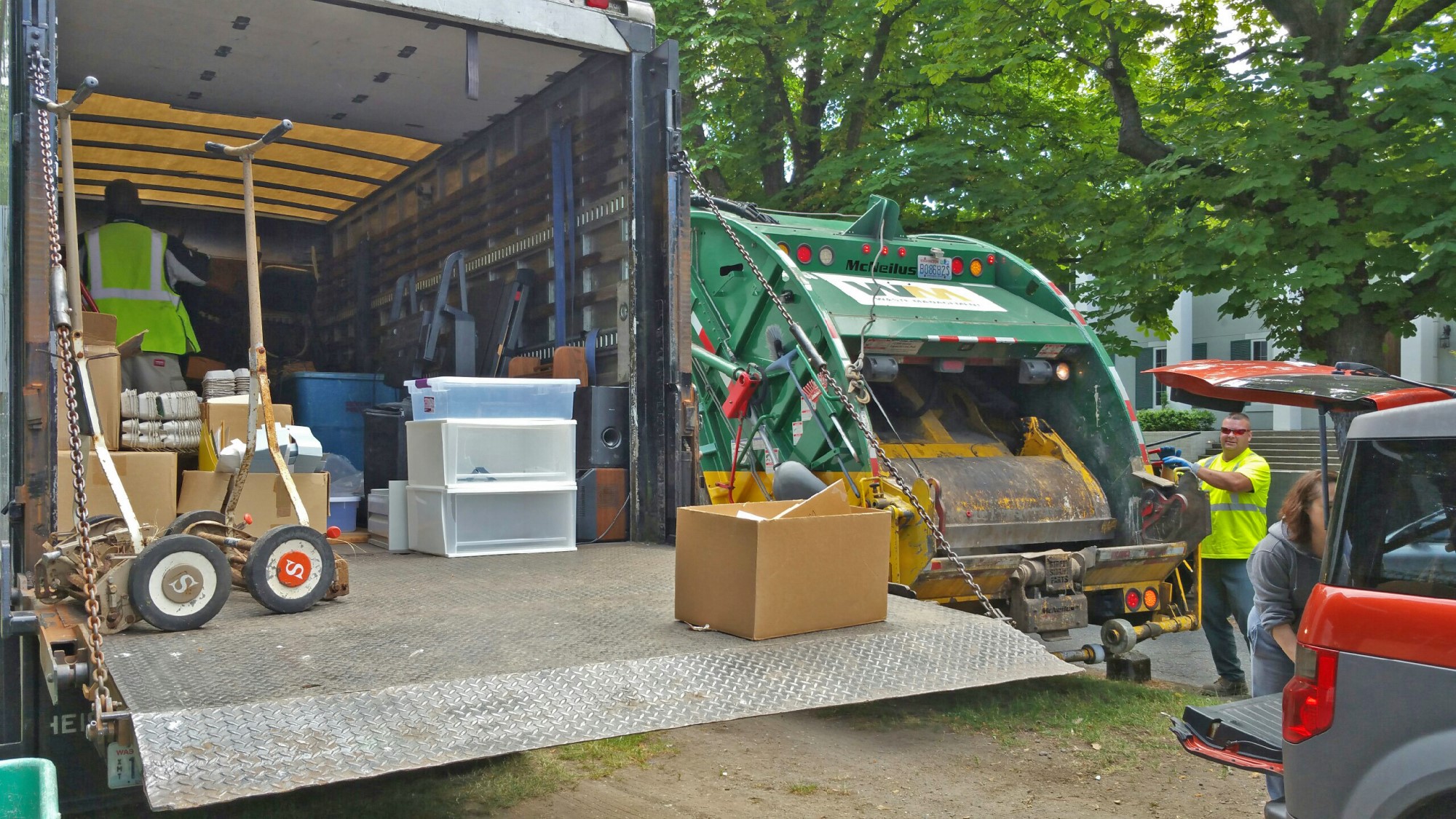 Husky Neighborhood Cleanup serves the north campus neighborhood during Greek Row’s move out and operates for three days around graduation—this year falling on June 9, 10 and 13. Since the northern portion of campus is technically located within the City of Seattle, UW Recycling partners with groups representing both the University and Seattle. “Conversations and meetings around planning and preparing for the event happen nearly year-round with Seattle Public Utilities, EcoReps, and the UW Office of Regional & Community Relations. We discuss how the previous event went and brainstorm opportunities for improvement,” said Erica Bartlett, UW Recycling program coordinator. “During the last three years I’ve coordinated this event, it’s been really exciting to collaborate with key partners to reduce illegal dumping and capture valuable items for reuse,” said Bartlett.

Unlike SCRAM, HNC does accept garbage and recycling, as well as furniture. However, food is not accepted. Trucks from Goodwill, UW Recycling and contracted vendor, Waste Management, park in the center median of Greek Row to immediately organize and collect items as they’re dropped off. “Overall, it’s a good experience and serves a great purpose,” said David Speed, UW Recycling driver lead. “The Monday after graduation was nonstop— the recycling truck was almost filled to capacity with a variety of e.Media, wood, metal and recyclable paper items. Goodwill received many donations, including five bikes in decent condition. The packer (garbage) truck was about 80% full. About 25 old couches and sofas were dropped off that day—everyone that brings one in gets a kick out of watching it get crushed by the packer truck,” continued Speed. In total, the event brought in 7.05 tons of material. 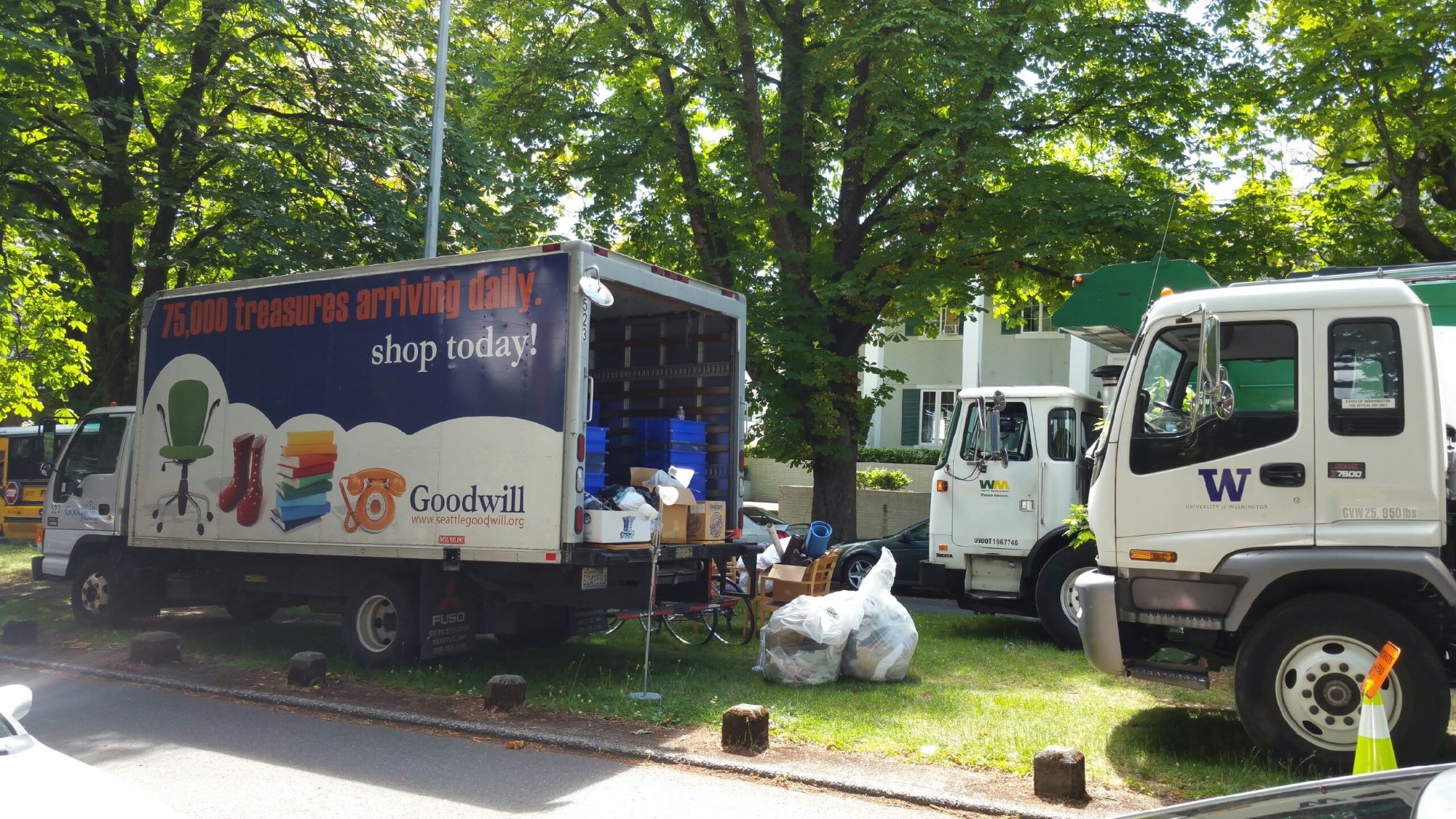 “One serious challenge each year is the vehicle traffic; there seems to be a lot of confusion as to who has the right of way at the intersection of 17th Avenue NE & NE 47th Street,” observed Speed. In the name of safety, this year “UW Recycling borrowed yellow traffic safety cones from UW Transportation Services and displayed signs announcing ‘workers ahead’ to help slow down vehicle traffic,” said Bartlett.

UW Recycling also manages smaller-scale events in August and September: Mini-SCRAM is organized specifically for students leaving HFS apartments when their leases end, and HNC Move-In for students settling into their ­­new homes on Greek Row.