In PACCAR Hall this past February, three digital boards were plastered above metal garbage, compost, and recycling bins. The displays scrolled through photos and animations of plastic water bottles, Cheerios containers, and compostable napkins to educate community members how to sort recyclables, compost and trash. 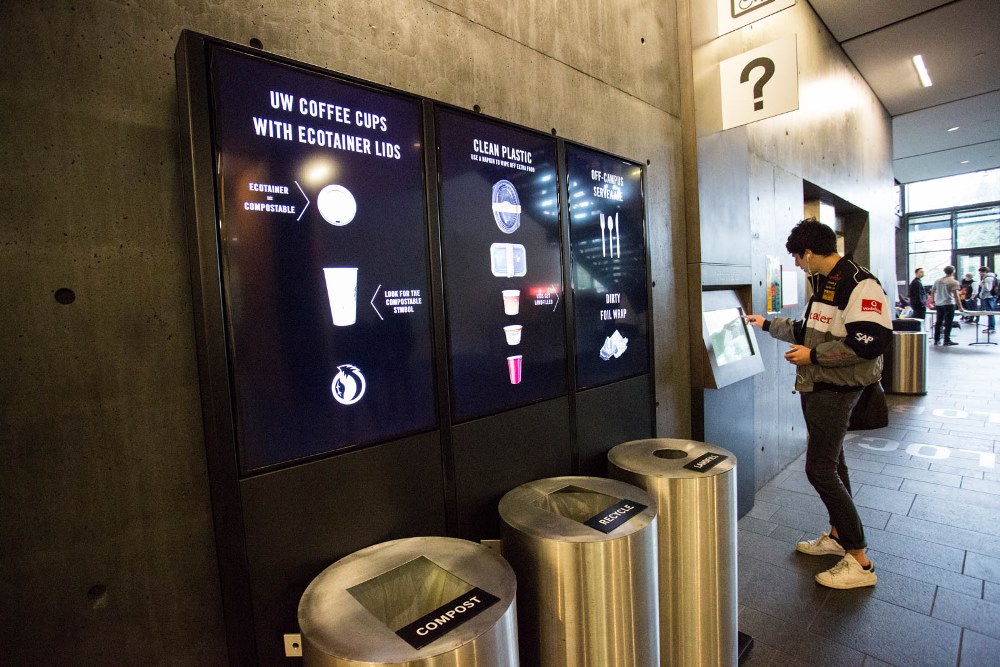 Outside the main elevators of PACCAR Hall, a student stands where the recycling, garbage, and compost installation was placed. The project was part of a collaboration between UW Recycling, the UW Garbology Project, and multiple departments on campus.

The project was a partnership between UW Recycling (Building Services Department, one of eight Facilities Services units), UW Garbology, and multiple academic departments on campus. The interactive trash display was designed to help individuals sort responsibly.

“When people don’t know what to do or how to dispose of something, they throw it away in the landfill bin. The phrase ‘when in doubt, throw it out’ has had a lasting impact and effect on people’s disposal behavior,” said Emily Newcomer, the assistant director of UW Recycling.

Designed over many weeks, the bins eventually ended up next to the main elevators in PACCAR. After an item was dropped into a bin, the screen displayed how many ounces have been composted, recycled, or trashed. Scales placed at the bottom of every bin tallied the metrics. The screen also displayed the amount of money saved by proper composting and recycling.

UW Recycling served as an “intermediator” between UW Garbology, a volunteer organization that sorted the compost, recycling, and trash bins, and Professor Karen Cheng, one of the many organizers behind the installation.

Newcomer worked with Cheng and her partner, associate professor Kristine Matthews, to educate the team about what items were recyclable, compostable, and garbage. Both Cheng and Matthews work in the department of Visual Communication Design in the School of Art, Art History & Design.

Students from one of two different winter quarter anthropology classes sort compostables, trash, and recycling before weighing the results. To view how the installation works in person, view the project video on Flickr. 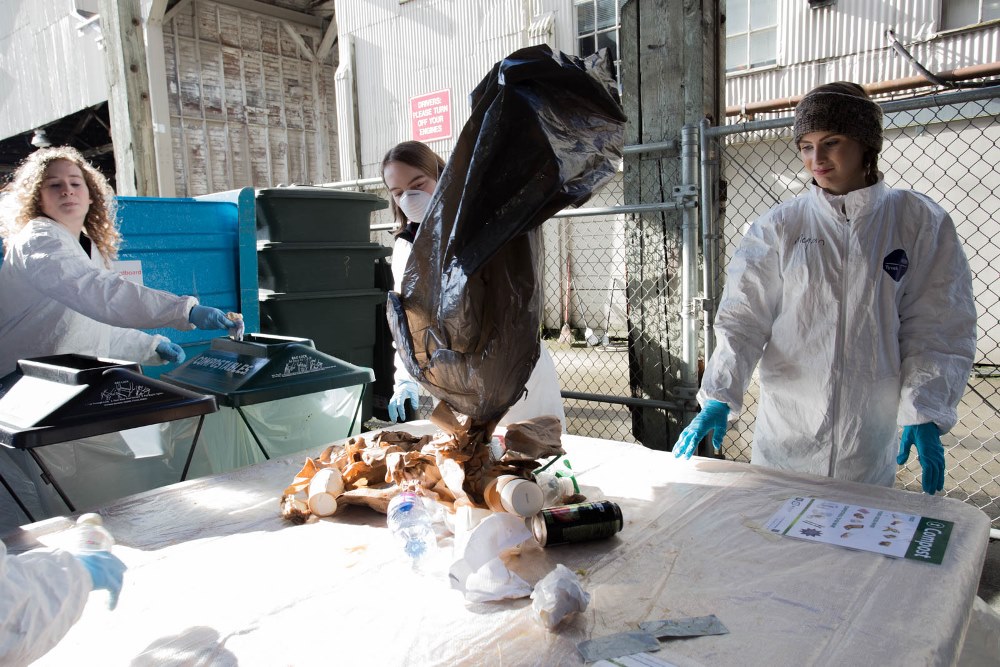 At the UW Recycling facility, student volunteers sort through compostables before the results of accurate sorting are recorded.

“Emily was an amazing resource in explaining and educating us on what items are recyclable, compostable, and landfilled at UW. We actually had limited and flawed knowledge before,” said Cheng.

While the project was on display, Custodial Services was responsible for making sure materials collected in the bins was separated properly from all other waste so it could be sorted. UW Recycling was responsible for hauling off the building’s waste stream for the students to sort.

UW Recycling crew collect landfill waste, paper, cans/bottles and all-in-one recycling from loading docks. They empty the dumpsters or toters into large garbage and recycle trucks, and dispose of the material at designated transfer facilities within the City of Seattle. Compost toters and dumpsters get hauled away by Cedar Grove, UW’s contracted food waste vendor, to process their processing facility.

Depending on the season, the type and amount of generated waste varies. 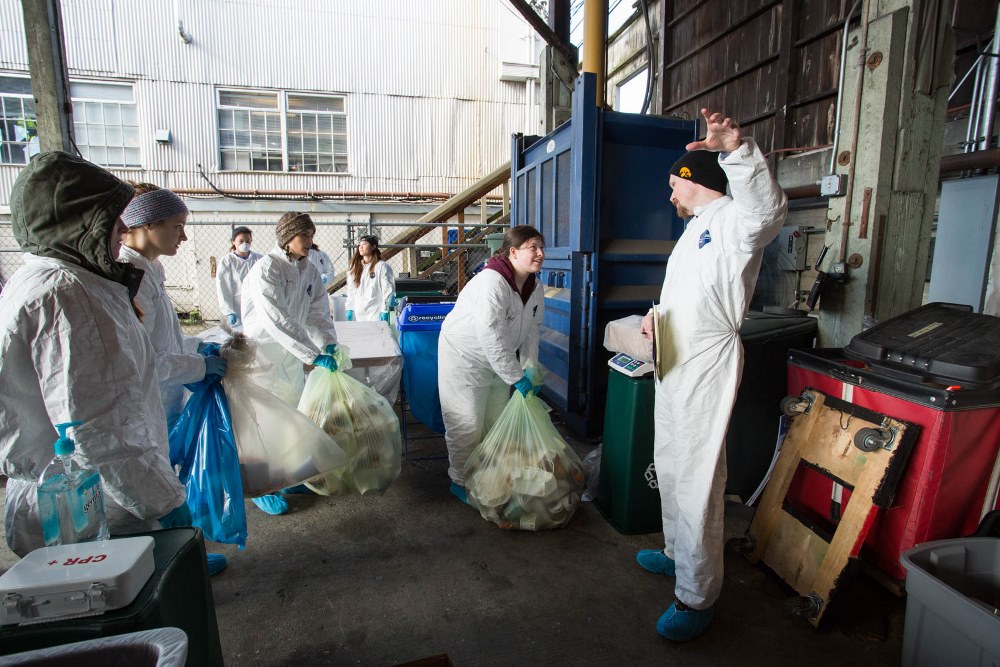 Jack Johnson (right), an archaeologist on-staff at the Burke Museum, directs students where to take the weighed compost at the UW Recycling facility in Seattle, Wash.

As of March 2016, trash sort results showed the installation helped people to correctly sort their waste compared to average numbers.

The team did a series of “pre-sorts” to identify the average number of inaccurately sorted product. The three bins in PACCAR were placed near the elevators and converted to all-in-one recycling, compost and landfill. No new signage was added, so the bins did not impact regular waste disposal behavior.

After the pre-sorts were completed, the team determined that approximately 48 percent of all waste was sorted incorrectly.

Cheng and Matthews collaborated with Jack Johnson, an archaeologist on-staff at the Burke Museum, and Professor Peter Lape from the UW Department of Anthropology to develop a sorting strategy. Lape and Johnson then sorted the material on-site at the UW Recycling facility. Students from one of two different winter quarter anthropology classes sorted the recyclables, compostables, and trash from the installation to weigh the results.

“[The installation] started as a teaching project, and my favorite part is working with the various UW classes and students involved, especially when new students participate in trash sorting,” Johnson said. “Many students are very surprised by what they see when they first truly examine a sample of our trash, and working collaboratively with them as they make that discovery is both fun and rewarding.”

After the installation in PACCAR was placed above the bins, incorrectly sorted waste levels dropped to 40 percent, an 8 percent decrease. Additionally, the amount of waste that was correctly diverted from landfills rose ten percent, from 46 percent to 56 percent.

“The display was extremely visual and intended to motivate people to think before they throw,” Newcomer said.

Student volunteers sift through material collected from the PACCAR Hall installation. Each item will be individually sorted in compost, trash, or recycling, and then weighed to determine the accuracy of community sorting at PACCAR Hall.

The partnership began when Johnson and Newcomer presented to one of Cheng’s classes during fall quarter of 2014. Karen was interested in sharing with students how art can drive education.

The installation concept was proposed by four graduate students in the UW Masters of Human Computer Interaction and Design program: Aaron Brako, Christopher Jung, Kosuke Shiraishi, and Donglu Song. All four students were enrolled in HCID 511, a course co-taught by Cheng and MHCI+D Director Linda Wagner. 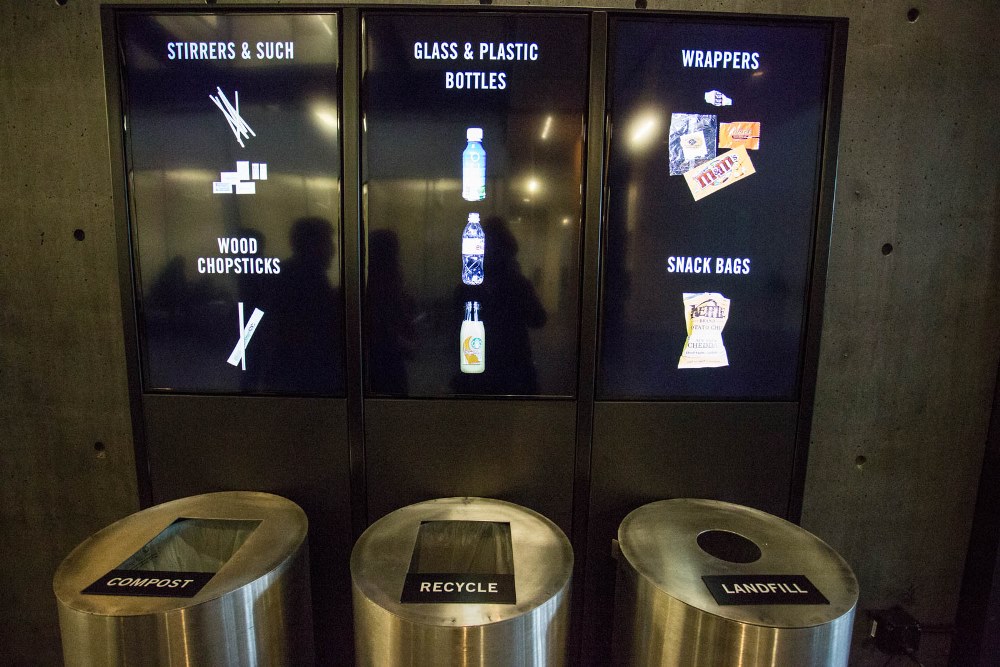 The PACCAR installation was designed to scroll through a variety of common objects on campus to educate the public about what is recyclable, compostable, and trash.

Cheng applied for a grant and received funding in March 2015. The project got off the ground after analyzing the cost of the display. Before launching, the installation was also facilitated by Patty Ching, a staff member in PACCAR Hall.

Cheng and Matthews collaborated with two UW Design alum, Dana Lee and Fanny Luor, to create on-screen animations for the installation. The original photography for these animations was created by current UW Design student Carly Lynch and UW Design alum Hart Boyd. The entire design process behind the installation animations had to be pre-planned: straws and drinks needed to be photographed separately, stop motion animations had to be shot frame by frame, and some objects like tin foil were difficult to capture on camera.

During the initial launch, the team discovered that many students wanted to touch the panels for interactivity. Students were also impatient about waiting for the screen to scroll through, and some just dropped their items into the bin without looking at the sustainability results.

While final data from the project is still being collected, the initial results show that unique display methods can drive education.

This piece was written in collaboration between Allison Nitch and Emily Newcomer of UW Recycling (Building Services Department), and Lindsey Boisvin of Facilities Services.