Out with the old

In the colder months, it’s easy to take water for granted. Warm showers last a little bit longer. Hands linger under the sink, just long enough be rid of the numbness. 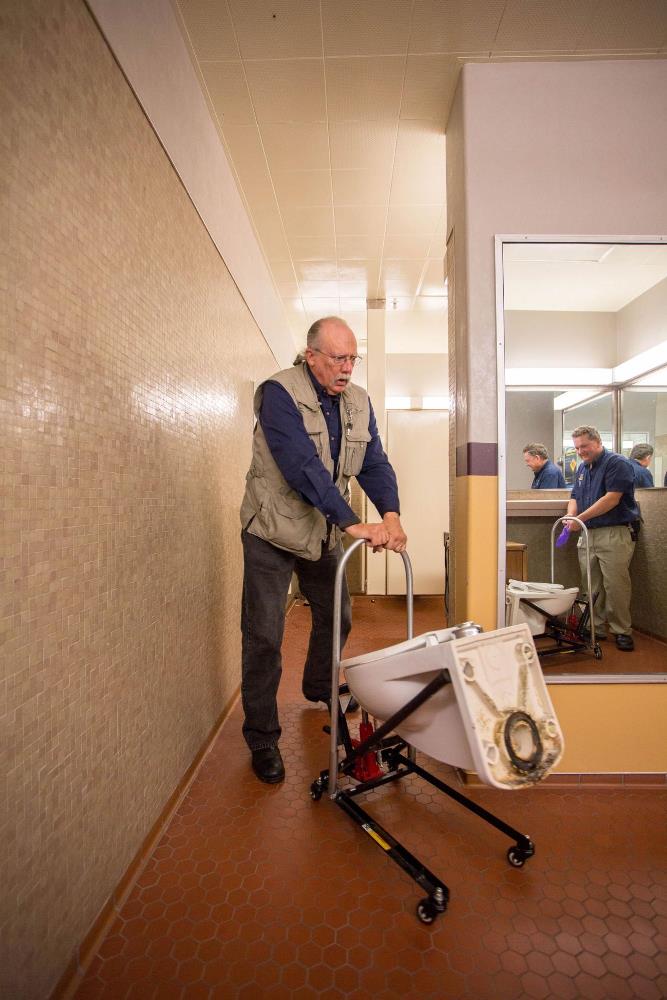 Eric Johnston from Facilities Services rolls out an older toilet model from the bathroom during a replacement of the fixtures in the UW Tower in Seattle, Wash.

A few gallons here and there can make an impact.

The University of Washington Tower knows this, and took one large leap this past year to develop sustainable practices year-round.

And it starts with their toilets.

It’s not a pretty picture: in the middle of the night, old toilets are wheeled across bathroom floors, swapped out for newer models.

The UW Tower worked one fixture at a time to replace toilets, urinals, and flushometers, and the project came with plenty of sustainable benefits.

Massive water savings at the Tower have been in the works since 2012.

The UW Tower team collaborated at the beginning of the project with Norm Menter, Facilities Services’ energy conservation manager. Menter helped negotiate contracts with Seattle Public Utilities. In the process, the UW Tower needed to determine what toilets would qualify for the project, and what the best long-term investments were.

The project officially kicked off in February 2014 when the project and rebate application was submitted to Seattle Public Utilities. After nearly a year of wheeling out old models and installing the new, the installations and inspections are complete. 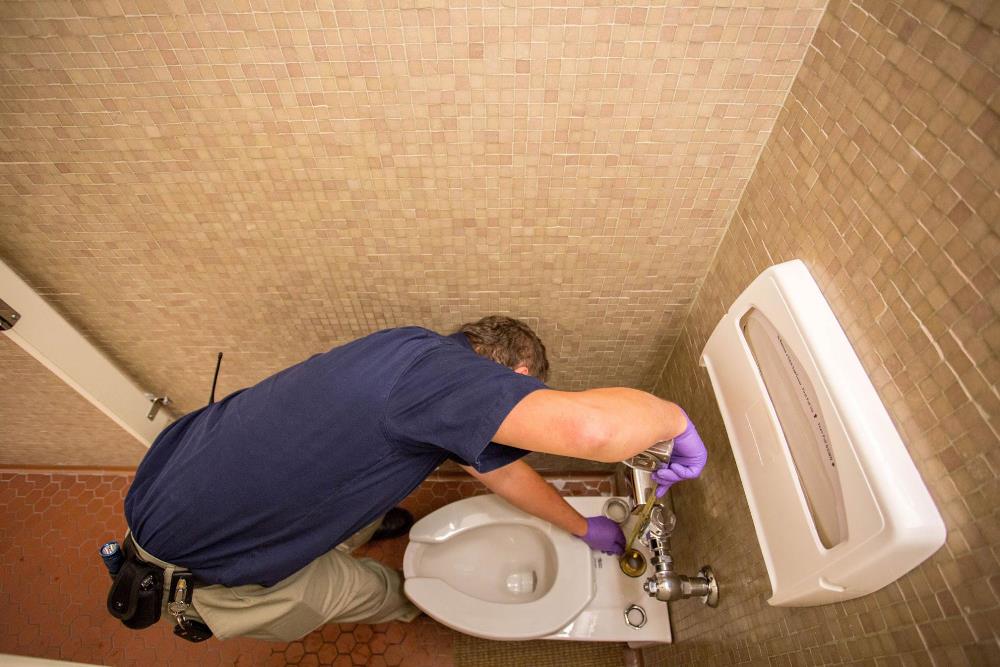 Peter Gorokhovskiy from Facilities Services installs a new toilet in the UW Tower in Seattle, Wash.

The UW Tower, located along Brooklyn Avenue, stands tall over the University District. It’s one the first things people see when they drive on campus, as it is Seattle’s tallest building outside the downtown area.

It’s massive: the Tower has over 22 floors, and holds work spaces for over 1,800 employees.

With such an enormous building, when one project begins, it can take time to finish. After replacing a few toilets every night, the Tower team wrapped up the year by completing their low flow fixtures replacement in mid-December.

“We haven’t had any issues with the new fixtures since we started installing them,” said Mark Pruitt, one of the UW Tower Facilities Operations Maintenance Specialist on the day-shift team.

It’s all about the long-term results. In light of one of Seattle’s driest summers, the project was perfect timing.

Imagining how much water a building like the UW Tower uses is difficult, if not impossible. Every employee, on every floor, contributes to turning on and off faucets, flushing toilets, and filling water bottles. Each droplet adds up.

In a building, water consumption is measured by units called CCFs, meaning “centum cubic feet.” One CCF is equivalent to about 748 gallons of water.

When the UW Tower estimated they could save up to 50,115 CCFs – over 37 million gallons – over a 15 year period, the project just needed a start date.

The fixtures Campus Engineering and Operations removed from the UW Tower used 3.5 gallons of water per flush.The new toilets, which are automatic low flushing models, use 1.28 gallons per flush. 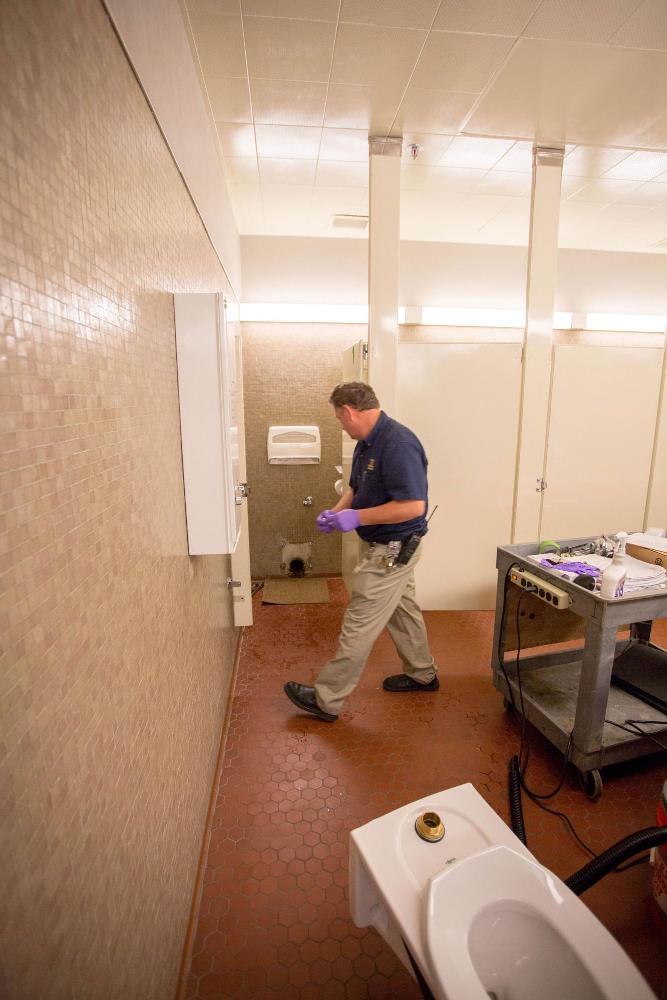 Peter Gorokhovskiy from Facilities Services prepares for installation of the new toilet model in a bathroom in the UW Tower in Seattle, Wash.

Troy Swanson, the UW Tower facility manager, said it was “just the right thing to do.”

The fixtures removed from the Tower originally used approximately 3.5 gallons of water per flush. Imagine that every time the fixtures are flushed, nearly 4 filled-to-the-brim milk jugs are poured down the drain. In comparison, the newer automatic low flushing toilet models only use 1.28 gallons per flush. The new low flush urinals use even less: 0.5 gallons per flush.

The UW Tower was able to implement the program because of projected rebate savings through Seattle Public Utilities.

In the initial planning process, the team estimated 188 toilets and urinals would be replaced, in addition to 33 additional flushometers. In the end, the rebate check clocked it at nearly $18,000. By converting so many fixtures, the building will save near $53,000 in utility savings per year.

The replacements were a no-brainer. It would only take a little over the year for the investment to payback.

“It was basically simplicity: it reduces inventory and reduces consumption,” said Swanson.

Throughout the week, the replacement team worked nights to change a few toilets per floor.

“Every day, we go through list and talk about how project went the night before,” said Pruitt.

While water savings and cost are crucial factors in why the installations were put into place, the UW Tower also had other goals in mind.

Reducing the stock on the shelves was a huge deal for the Tower team. Multiple toilet model parts were sorted on their inventory shelves. Now, the entire inventory can be reduced. With one model of toilet, it’s easier to eliminate waste and materials that need to be recycled or trashed.

Swanson said the project couldn’t have moved forward without of Campus Engineering and Operations, and Lean practices.

“We couldn’t have done it without them,” said Scott Bybee, the UW Tower facility supervisor.

While some may celebrate the end of the New Year with fireworks and party poppers, the Tower team got to celebrate with a completed utility inspection and a rebate check.